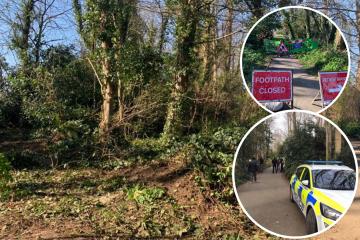 DEVELOPERS of a controversial holiday lodges plan in Bembridge are walking away from the site.

In 2021, the land on the secluded Love Lane site had been earmarked for two one-bed eco-holiday lodges, by company Love Lane IOW, which caused uproar in the local community.

There had been 300 objections to the plans.

But now after a challenging planning history with the plans ultimately refused, the land has been split into two plots and is up for auction.

Listed with land and property auctioneers, Clive Emson, each plot has a guide price of £30,000 and above.

The complaints against the scheme were branded as an ‘organised campaign’ that ‘bordered on mass hysteria’ by the planning agents, Plan Research.

The proposed lodges by Plan Research.

It was also alleged police were called to the site eight times during the planning process.

Planning documents said the lodges would provide maintenance to the woodland as the site had fallen into neglect.

The application was determined by the government’s Planning Inspectorate as the Isle of Wight Council missed its statutory deadline to do so.

Both authorities agreed, however, the application should be refused due to the impact on the rural character of the area.

Both plots — 0.19 acres and 0.17 acres respectively — have vehicle access to Love Lane and electricity and water connections.

The site can be used for ‘glamping’ for up to 28 days a year.