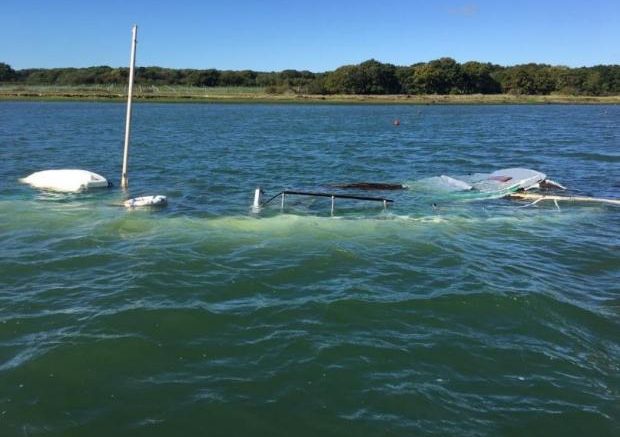 Ventnor Coastguard Rescue Team has issued a plea after concerns were raised about a yacht which sank on the River Medina, while Cowes RNLI spent three and a half hours searching for the occupants of a dinghy found abandoned on a slipway at East Cowes.

It prompted a call out for the coastguard team – and a search for the occupants.

The boat actually sank four days ago but, said Ventnor Coastguard Rescue Team, no one had notified them.

The yacht was underwater near The Folly Inn

Earlier, an abandoned dinghy at a slipway in East Cowes saw the Cowes RNLI team searching off the town’s Esplanade.

It contained belongings and looked ready to launch.

Cowes RNLI launched at 8:30am and spent more than three hours on the water, in bitterly cold winds.

The crew searched between East Cowes and Egypt Point, plus Cowes Harbour and the River Medina as far as The Folly Inn.

No-one was found, however, and eventually the four-person crew returned to the station.

Investigations revealed that the dinghy had been based at Shepards Marina, alongside a yacht. It was later returned there by a Cowes Harbour Commission launch.

The crew searched the Solent after the dinghy was found.

The team were paged early this morning alongside @CowesRNLI to a 999 call regarding a Dinghy Against the rocks at East COwes with belongings, oars and the engine in the down position. Full search of River Medina and shorelines. pic.twitter.com/mEeOSUvLDQ