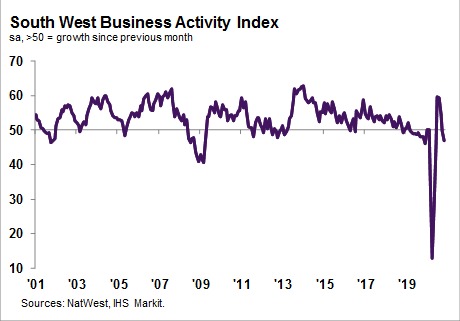 The headline NatWest South West Business Activity Index – a seasonally adjusted index that measures the month-on-month change in the combined output of the region’s manufacturing and service sectors – fell from 49.7 in October to 47.1 in November.

This signalled a second successive monthly decline in business activity.

The rate of reduction was solid overall, albeit much slower than those seen during the height of the pandemic.

Companies linked lower business activity to the renewed lockdown measures stemming from the coronavirus pandemic, and a subsequent drop in client demand.

That said, new business fell at a softer pace than seen in October.

Nonetheless, firms cut their staff numbers sharply amid further signs of excess capacity and a stronger rise in costs. However, optimism towards the year ahead picked up to a record high amid hopes of a timely end to the pandemic.

South west private sector companies signalled a further reduction in new business during November. That said, the rate of decline softened since October and was moderate. Lower sales were generally attributed to the national lockdown, which led to temporary business closures and lower customer numbers.

A back-to-back fall in new business was also seen at the national level, though the rate of contraction was slower than that seen in the south west.

Business confidence towards the 12-month outlook for output improved markedly in November, despite sustained declines in output and sales.

According to panel members, business activity and new orders were expected to recover when the pandemic situation improves, restrictions are eased and market conditions normalise.

Sentiment regarding the year ahead also improved at the UK-level, rising to the highest since March 2015, but was not quite as robust as that seen in the south west.

As has been the case in each month since March, employment across the south west private sector fell during November.

Furthermore, the rate of job cuts quickened since October and was the sharpest recorded since August. Anecdotal evidence frequently linked lower staff numbers to redundancies stemming from the pandemic, as well as decisions to place staff on furlough.

Employment fell at a similarly sharp rate across the UK as a whole.

The rate of depletion was little-changed from that seen in October and solid overall.

At the national level, outstanding business fell for the second month in a row, albeit at a softer rate than seen in the south west.

Across the UK as a whole, input prices rose to a much weaker extent to that seen in the South West, albeit solidly overall.

Adjusted for seasonal factors, the Prices Charged Index posted above the neutral 50.0 value to signal a renewed increase in selling prices across the south west.

Though only fractional, it was the first time that charges had increased since August. Reports from survey respondents indicated that companies raised their selling prices due to greater input costs.

At the national level, prices charged were broadly stable after a slight fall in October.

Also published today, the latest NatWest UK Small Business PMI® survey shows a decline in small firms’ business activity for the second month running in November, with the All-Sector Small Business Activity Index registering at 47.4 (up slightly from 47.0 in October).

However, news of a vaccine boosted confidence and business outlook at small firms to a ten-month high.

“However, business confidence improved sharply, and rose to its highest since this series began in mid-2012, on hopes that the pandemic situation will improve, restrictions will ease, and market conditions will normalise in the coming months.