ANOTHER hint of what could be in store for East Cowes seafront has been unveiled.

The town is on the up after the Isle of Wight Council was successful in securing £5.8 million as part of the government’s levelling up fund.

The public was asked last year what they would like to see included in the plans and ideas have now been fed back to East Cowes Town Council by architectural consultants ERMC.

A plan to rejuvenate Albany Green has been produced to make use of the currently dead space.

ERMC says the Albany Green seafront project will act as a focal point for activity and a catalyst for future enhancements.

A viewing platform — built on the Southern Water pumping station and now closed public toilets — cafe and exhibition space, a public pontoon and a viewing jetty have all been suggested in the designs.

He said: “Unlike many past regeneration plans our town has seen, this one has some legs, not least because there is funding identified.”

Cllr Love said there was a long way to go but it was a start and there will be further discussions with residents in the coming months. 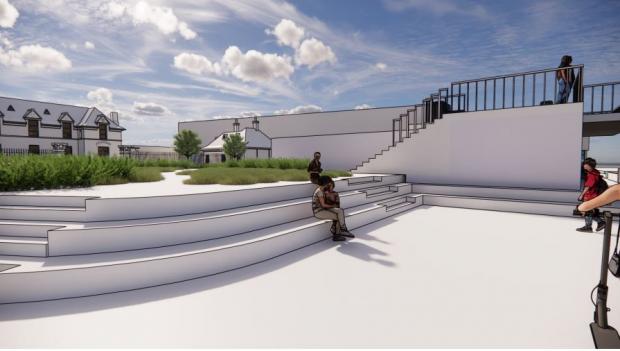 Plans for the viewing platform and public area space. Picture by ERMC.

Apart from these plans, there were two schemes, proposed by Savills for the Isle of Wight Council, both allowing for a mix of new homes and employment space.

The first incorporates a hub for marine-based jobs and innovation space around the seafront, and proposes visitor facilities around Trinity Wharf and Phoenix Yard, with a mix of employment and hotel space, with more food and drink areas.

The second scenario adds training space and hostel accommodation around the Esplanade with employment moved to Trinity Wharf and Phoenix Yard but with some flexibility still to allow for a hotel.

Police on the Isle of Wight are continuing their appeal for information following a fatal road traffic collision that claimed the life of a 45-year-old Island man during the early hours of Saturday morning. As previously reported by Island Echo, the driver of a Renault Trafic died at the scene of a single-vehicle crash on […]
The post <span class='islandechotag'>OP HAPPEN:</span> POLICE CONTINUE TO APPEAL FOR WITNESSES TO FATAL CRASH AT CRANMORE appeared first on Island Echo – 24hr news, 7 days a week across the Isle of Wight. Island Echo – Isle of Wight …

ANOTHER hint of what could be in store for East Cowes seafront has been unveiled. Isle of Wight County Press | News …

Four sailings will be hit by late departures. Here’s what to do. Isle of Wight County Press | News …