COMING up against two of the favourites and winning the 90th Round the Island Race was a significant achievement for accomplished Isle of Wight sailor Tom Dawson on record-breaking multihull, PowerPlay.

PowerPlay took the line honours — reaching the finish line quite comfortably ahead of the highly fancied French entries ULTIM Actual and the 32m trimaran, IDEC.

The mulihull was the first to finish the race, in a time of 4hrs 11mins 1sec — more than 16 minutes clear of their nearest challenger, Actual.

Tom, of Gurnard, was the crew’s afterguard, making all the major tactical calls throughout the race.

The 35-year-old, who hails from the North East, has taken part in every Round the Island Race since he moved to the Isle of Wight in 2008, was delighted with the result.

“We did well, but the victory was unexpected — especially coming up against the bigger trimarans. It was very pleasing to win,” said Tom. 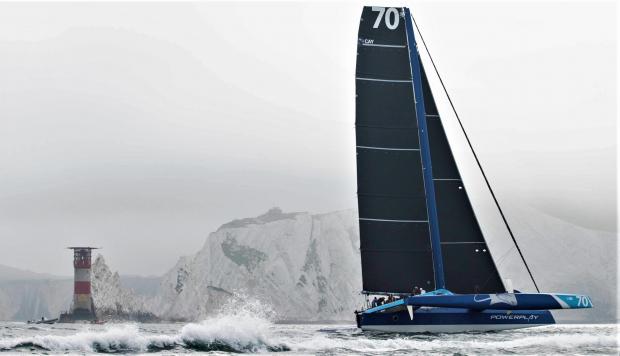 PowerPlay in action near The Needles. Photo: Paul Wyeth

“We set out to win, but nothing is ever guaranteed. To win the Round the Island Race is always great and to beat those guys — especially the French teams, which gave us stiff competition — was pretty good,” said Tom.

“When we started, the wind was light, fickle and very sticky, so unfortunately, when conditions are like that, you go virtually the same speeds as everyone else.

“But as we got out towards Lymington-Yarmouth way, it started to fill in a lot.

“We did a few manoeuvres that allowed us to attack, which helped us against the trimarans.

“When we ran from The Needles to St Catherine’s Point, we managed to carry on pulling away from them.

“However, when we got to St Catherine’s, the tide was against us — very strong — and the wind was dying a bit.

“We thought, ‘they’re going to catch us up here’, but we managed to get through that period pretty unscathed.

“From there, it was relatively simple point sailing towards Bembridge and beyond. The breeze was good and strong in the Sandown Bay area, where we managed to hit about 25-26 knots. We were flying along there.”

Running the crew’s tactics throughout the Round the Island Race put a lot of responsibility on Tom’s shoulders. 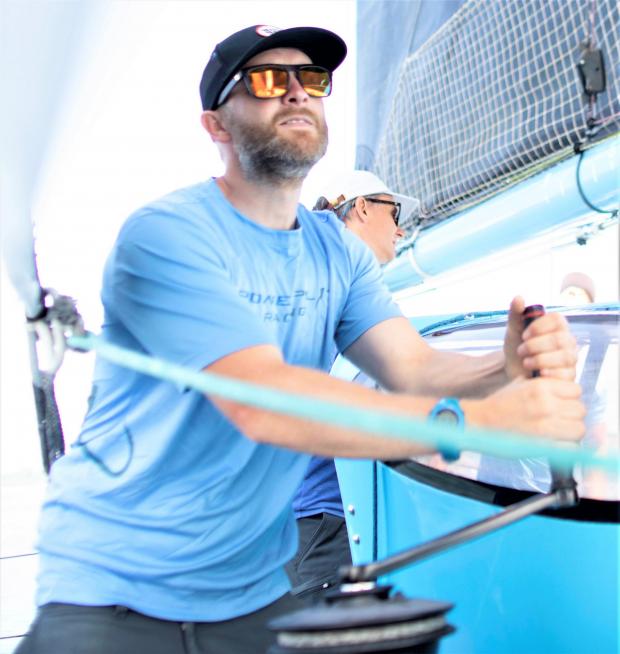 But Tom has proved for several years how accomplished a sailor he is, with numerous achievements and great experience in multi and monohull racing, with Fastnet and Cowes to Dinard Race world records already achieved this year with PowerPlay.

Speaking of the Round the Island’s race tactics, Tom explained: “It was quite difficult to begin with in the benign conditions, but after that it became relatively simple.

“With the French challengers having great pedigree — IDEC being a Jules Verne Round the World record holder and Actual, under previous name Masif, holding the single-handed round the world record — we all needed to focus on getting the result. We did well.”

Tom, a member of Gurnard Sailing Club, will be competing in Cowes Week and in the next Fastnet event, on what will be one of the fastest monohulls in the race — Ed Fishwick’s Cowes-based GP42 Redshift.