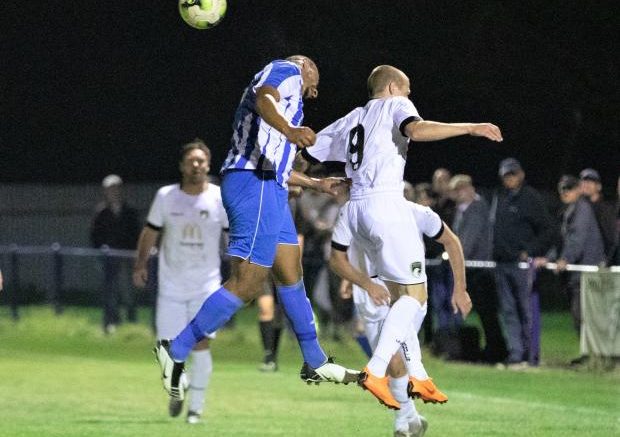 THE Football Association is to investigate racial abuse made against a Cowes Sports player in a Wessex League match at Fleet Town yesterday (Saturday).

Cowes Sports skipper, Callum Chase, was the latest target of racist abuse, amid the high profile, worldwide Kick It Out campaign to stamp racism out of the game.

It is alleged, a small group of Fleet Town supporters directed abuse at Callum — heard by players of both sides — in yesterday’s match away at Calthorpe Park.

After the game, Callum reported the incident to the referee and the complaint was passed in turn to the FA.

The FA contacted Callum today (Sunday) and he has written a statement.

Callum said: “It was an uncomfortable situation — and one I don’t want to be in ever again.

“Issues like this needs to be raised and people need to be aware it is still happening.

“I’m disappointed and hurt. I feel like it shouldn’t be happening anywhere — let alone at a football match.

“I didn’t travel two-and-a-half hours from university to play football to then get racially abused by a bunch of fans.

Cowes Sports are to lodge a complaint with the Wessex League, with the hope the perpetrators are brought to justice.

Fleet Town — who have a squad that includes three black players — put out a statement on the incident, which they ended with #KickItOut

“We will be holding an internal investigation in regards to the allegations made against a small number of home fans,” it read.

“We would like to take this opportunity to remind all players, fans and clubs there is no place in football for racism.

“We at Fleet take great pride in our diverse squad and, having been at the receiving end first hand, we know how devastating such events like this can be.

“Any fans who are found guilty will receive a life ban from the club to highlight the severity and our stance on the matter.”

The incident whipped up a firestorm on social media in support of the Cowes player.

Graham Brown, a regular attender at Westwood Park, said: “Very sad and angry to hear of this.

“Most of our teams are multiracial these days and there is no place in football for this sort of abuse.

“Fleet Town should be taking action against these people — a Covid entry list (if it can be used) should be an ideal opportunity to find out who they are.

“If the officials had any guts they would have called a halt to the game.”

Toby Collard added: “I can’t even begin to imagine how it felt for Callum. There’s going to be a lot of eyes on Fleet Town and the Wessex League to see how this gets handled.”

Emma Lewi commented: “I hope Fleet will do their best. In a Wessex League-sized crowd, you know who the halfwits and nasty bits of work are likely to be, so there’s no excuse.

“Can only hope there is some proper action taken here.”