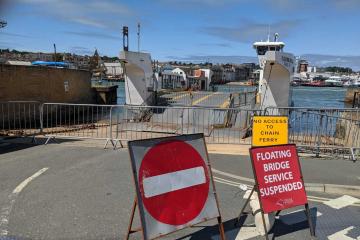 The floating bridge will not return to action for several weeks, says the Isle of Wight Council.

The vessel, which provides a mobile link from Cowes to East Cowes, was expected to run imminently following scheduled maintenance.

Now, after more than three weeks out of service, another delay has been announced.

The Isle of Wight Council said: “A programme has been developed with our shipbuilders to carry out (the necessary) work.

“By the end of August we will know the cause, extent of the issue, date for completion of the works and return to service.

“The Isle of Wight Council apologises for any inconvenience caused by this ongoing disruption to the service.”

The launch service for foot passengers will continue to operate from 5am to 11pm Monday to Saturday and 630am to 11pm on Sundays.

The Isle of Wight Festival 2021 is here and we’re keeping you up to date with the action over the weekend in this LIVE blog. Isle of Wight County Press | News …

Bembridge RNLI Lifeboat, alongside Bembridge Coastguard Rescue Team, was tasked to locate and assist 2 people who had been reported as being in difficulty returning from walking to St Helens Fort this evening (Friday). Having launched at just after 20:55, it did not take the crew of the Inshore Lifeboat long to reach the area […]
The post COASTGUARD AND LIFEBOAT TEAMS IN SEARCH FOR FORT WALKERS OFF ST HELENS appeared first on Island Echo – 24hr news, 7 days a week across the Isle of Wight. Island Echo – Isle of Wight …

100,000 Islanders are now double vaccinated against COVID-19, according to the latest official figures from NHS England. A total of 99,574 people had received both of their vaccinations as of Sunday (29th August), with around 1,000 more people visiting a local vaccination centre every week. It means that the number will now be in excess […]
The post 100,000 ISLANDERS NOW DOUBLE JABBED ACCORDING TO LATEST FIGURES appeared first on Island Echo – 24hr news, 7 days a week across the Isle of Wight. Island Echo – Isle of Wight …

MORE than 70 new cases of Covid-19 have been confirmed on the Isle of Wight, according to the latest data. Isle of Wight County Press | News …